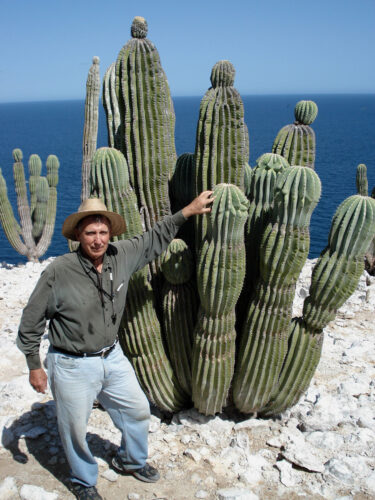 Richard poses with a Cardon Cactus on an island in the Sea of Cortez. Photo by Ben Wilder.

The world lost a great desert botanist, a prolific researcher and a generous human being when Richard Felger passed away in late October 2020, at his home in Silver City, New Mexico, at the age of 86. A dedicated field botanist, Richard collected tens of thousands of plant specimens between the 1950s and 2015, many of which are housed at the University of Arizona Herbarium. He published more than 100 peer-reviewed articles, wrote detailed floras for desert regions of northwestern Mexico and southwestern Arizona, and documented the ethnobotany of the Seri Indians of Sonora. This year alone, Richard finished up five major writing projects, three of which are forthcoming or already published: Field Guide to the Trees of the Gila Region of New Mexico; The Desert Edge: Flora of the Guaymas–Yaqui Region of Sonora, Mexico; and Dark Horses and Little Turtles and Other Poems from the Anthropocene. Other noteworthy publications include The Euphorbiaceae of Sonora, Mexico; Flora of the Gran Desierto and Río Colorado of Northwestern Mexico; Flora of Southwestern Arizona; Oasis at the Desert Edge: Flora of Cañón del Nacapule; People of the Desert and Sea: Ethnobotany of the Seri Indians; Plant Life of a Desert Archipelago: Flora of the Sonoran Islands in the Gulf of California; and The Trees of Sonora. Richard’s website showcases his research and writing for a variety of audiences, along with a biography and photos of friends: https://www.desertfoodplants.org.

Richard grew up in Los Angeles, California, where he was enamored of the ocean and its cornucopia of sea creatures. But a fortuitous trip to Álamos, Mexico with ecologists from UCLA when he was still in high school ignited his interest in the vegetation of the Sonoran desert. He chose the U of A for his university training because it was close to Guaymas and the Sea of Cortez; he would go on to write his dissertation on the flora and vegetation of the Sonoran Gulf Coast and nearby islands. His peripatetic life as a botanist led him to a short stint as a faculty member at the University of Colorado, and then as Senior Curator at the Museum of Natural History of Los Angeles County. Back in Tucson, Richard established the Research Department at the Arizona-Sonora Desert Museum. He founded the Drylands Institute in 1988, serving as its director until 2007. He was also an energetic Associated Researcher at the University of Arizona Herbarium. 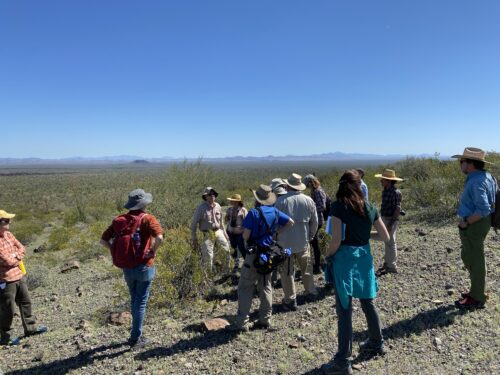 Richard leading a field trip for the International Sonoran Desert Symposium to Pinacate, Sonora, in March 2020. Photo by Lyn Loveless.

His contributions to Sonoran and desert botany, new crops research, and ethnobotany are broad, deep, and long-lasting. But Richard was also a poet, storyteller, sea turtle conservationist, promoter of aridland crops, and loyal friend to many. He gave many talks and led numerous field trips for Arizona and New Mexico native plant societies. His floras and books were written for non-specialists, and he took great pains to avoid the technical terminology he called “botanical code language.” He was loved for his research work, his mentoring of young scientists, his sense of humor, and his eccentricities. He could be abrupt and demanding of attention, though as Jim Verrier notes, “his ‘flaws’ were endearing to those who loved him (but perplexing to strangers).” Sue Rutman notes that he welcomed collaborators on every project and “he had a warm and generous side that too few people experienced…. He wanted to help other people love plants the way he did.” Bill Broyles, coauthor and colleague, asks, “How could I ever forget a friend with the productivity and strength of a velvet mesquite, the singularity of a boojum, the curiosity of dodder, the intensity of cholla, the open smile of a Peniocereus, and the legacy of ironwood?!”  Richard Felger left an indelible mark on desert botany and on botanists in the desert southwest.  He will be greatly missed. 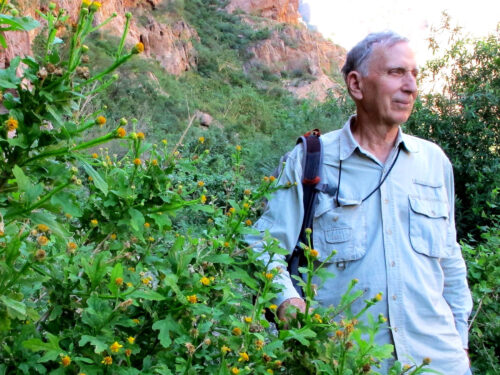 Richard poses with one of his namesake plants, Verbesina felgeri, in Nacapule Canyon, Sonora, in 2015. Photo by Jim Malusa.