<< Back to AZNPS Conservation and Restoration Ongoing Projects

An 18 acre saguaro/palo-verde bajada was bladed by a BLM mining claimant (1980-1997) and subsequently infested with a monoculture of buffelgrass.  Volunteers worked with BLM to bring back native plant species (108 species) by carefully spot spraying the buffelgrass and allowing the native plants to emerge and thrive. Over a 12-year period, simple water harvest structures (>150) were constructed by volunteers and tree branch mulch (> 200 truckloads) was brought in to cover bare soils. Native tree species were seeded by hand and in recent years young saguaros are being transplanted into the site.

Opening the soil and harvesting and planting desert tree seeds

In June 2020 a BLM team of large machinery operators ripped the entire 18 areas along contours to break up the soil and form contoured terraces. Immediately following that work, volunteers harvested nearby desert tree seed (Whitehorn Acacia, Foothill Palo Verde, and Ironwood) and hand planted the seed during the months of July and August 2010. Volunteers have continued to harvest and plant seed every year to fill in gaps where trees had not emerged. By 2016 there were over 2000 established desert trees on the 18 acres. All restoration trees were planted from seed and no trees were ever irrigated. By 2022 some of the trees planted in 2010 are 12 feet tall.

With the onset of monsoon rains in July 2010, the entire 18 acre site was like a golf course buffelgrass green by mid August 2010. A team of 3 to 5 volunteers spot sprayed buffelgrass three times weekly from the first week of August through mid October 2010. Multiple passes were made following the mantra of “spraying the bad guys and leaving the good guys”.  Ongoing spot spraying continued every season with monsoon and winter rains until by 2022 we now are needing to control less than 150 plants per season.  The exhaustion of the buffelgrass population was rapid. In 2010 we applied a total of 234 gallons of herbicide, in 2011 74 gallons, in 2012 45 gallons, and 2013 10 gallons. Since 2015 we have annually applied 3 to 5 gallons per year depending on the amount of rains and size of the plants.

Keeping rainwater on the site

The restoration is situated on the foothill slope of the Waterman mountains with grades up to 6%.

Rainwater flows onto the site from hillsides above and is also collected over the 18 acres. An extensive network  of one-rock dams and rocked waterways has prevented the downcutting of erosion channels. One-rock dams are only one rock deep and designed to slow rainwater flow and spread it out laterally to soak into the soil. As plants have proliferated and grown in size,  even high volume rainwater stays entirely on the site and none if it runs off.

The mining claimant had spread thick layers of compacted gravel over his residential site. That deep compacted gravel prevented most native plant emergence. We hired a backhoe operator to dig “water retention dimples” over a 2-acre area. Within one year native plant life and planted tree seeds emerged and vigorously developed.

The desert soil surface had been scraped by the mining claimant and later disturbed by the BLM heavy equipment soil ripping,  Large areas over the site remained bare without vegetation after two years. We discovered that tree branches spread over those bare provided enough shade and residual soil moisture to support the emergence of both annual and perennial plants. The effect of tree branch mulching was remarkable even after one year. The decaying tree tissue coupled by emergence and growth of native plants quickly brings life back to the soil and enhances rainwater absorption into the soil. It is important to note that we were careful not to bring in tree seeds of species that were not already growing on the restoration site. (no mesquite, blue palo verde, etc seed).

The Return of the Natives : 108 native species and counting !

We hand-seeded native tree species continually between 2010 and 2022.  Many of the older trees have started to flower and produce seed on their own. In addition to the desert trees we also broadcast seeded Ocotillo.

Other than desert trees and Ocotillo we did not seed or transplant any other desert species. We did not plant any seed mixes. A total of 108 native species have emerged from  the soil seed bank or from seed blown in from adjacent desert areas. Twenty-one of the 108 natives are grass species.

This tiny unnoticed grass less than 6 inches tall is one of the first species to emerge in disturbed soils in the desert. It quickly spreads by seed and when there is enough moisture it produces runners with little plantlets. After only two years of growth it gracefully dies and leaves behind abundant plant litter that catches seed of blowing native plants.

This showy flowered annual plant is remarkably opportunistic in its ability to germinate after even light rain showers. It emerges and remains hunkered down until there is sufficient moisture for growth to resume during the monsoon season. In wet years it can send out runners up to 15 feet covering the surface in carpets of showy pink flowers. At the end of the season it gracefully dies and its litter provides shelter for other species to later emerge. It also provides habitat for insects and rodents.

This annual grass emerges in August and is especially abundant wherever buffelgrass has been sprayed.

In early stages this grass strongly resembles buffelgrass. As buffelgrass has been removed during the course of restoration, Mexican panicgrass has become one of the most common monsoon grasses on the restoration area.

Triangleleaf bursage (Ambrosia deltoidea) is one of the mainstay plants of the Upland Saguaro-Foothill Palo Verde subdivision of the Sonoran Desert. In undisturbed desert it is the major sub brush species. It lives for over 70 years and is drought deciduous. Under mild drought it drops its leaves and under severe stress if drops its branches. Over the decades it provides significant plant litter to the soil thereby building up soft soil texture underneath it. The soft soil facilitates burrowing by rodents and that in turn promotes water absorption into the soil during monsoon and winter rains. The extensive coverage of triangleleaf bursage on desert floors is key to capturing rainfall water and avoiding soil erosion. Triangleleaf bursage quickly succumbs to buffelgrass infestation. Getting buffelgrass under control on this restoration site has resulted in a heathy population of triangleleaf bursage that is gradually expanding throughout the restored areas.

In 2012 BLM granted AZNPS volunteers permission to harvest saguaro fruit on Ironwood Forest National Monument for the purpose of sowing the seed on the restoration site. We harvested fruit and sowed seed under young desert trees over 8 years. Up to now only one saguaro plant has been found growing under a brittlebush plant.

In 2021 AZNS signed an agreement with Tucson Cactus and Succulent Society whereby  TCCS would donate small salvaged saguaros to AZNPS to transplant under desert nurse plants on the Waterman Restoration. So far over 30 saguaros have been transplanted. This effort will continue into the future. 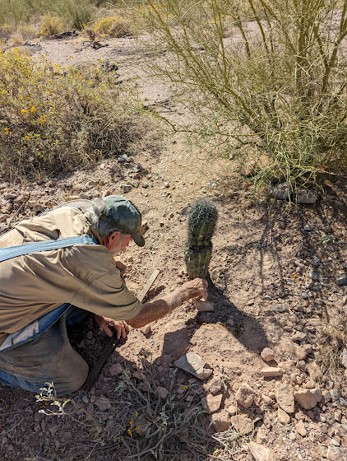 A passive water-harvest garden was designed by AZNPS volunteer Dennis LeBlond in 2017.

Twenty tons of railroad ballast course rock was overlayed with 80 tons of desert soil and rock.

The garden was built on a slope and swale area  that allowed rainwater to be absorbed into the structure,   stored in the railroad ballast layer and wicked up by the drier desert soil.

Desert tree and ocotillo seedlings were planted from deep pots and hand watered through perforated watering tubes for a period of a year before being removed. Desert grasses and forb species were planted by seed and have emerged following rainfalls.

The demonstration garden signage is maintained by volunteers and moved around as plants die and new plants emerge.

Over 7000 Hours of Volunteer Work

A core group of 3 to 5 AZNPS volunteers provided continuity, direction and coordination over the 12 years of restoration. In addition to the core AZNPS group, BLM interns have provided timely assistance at crunch times.

There have been fourteen Eagle Scout projects in which groups of 15 to 30 scouts and family members provided significant effort in focused areas. Most of the projects were dedicated to the construction of one-rock water harvesting dams and tree seed planting.

We organized annual Waterman Restoration volunteer work day the first Saturday of December. Typically there were between 40 and 50 volunteers that were split into seven groups of up to seven  volunteers. Several tons of rocks were moved to build water harvest features during those work days.

At exactly the same time of day on 15 October every year photographer Jim Cowlin took pictures of the identical scene at each of the six photo points.

Below are the six views that you can scroll through to see fixed point photos for each year starting in 2011. 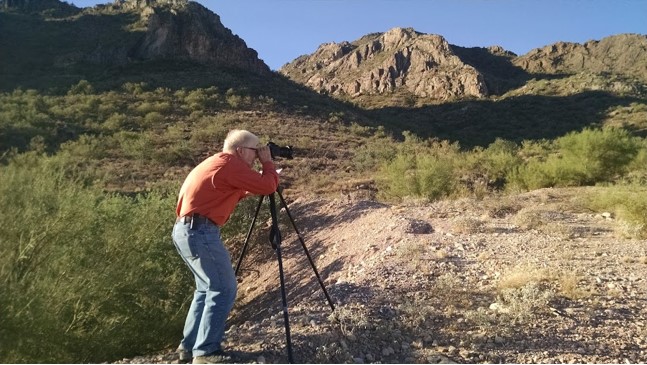