The Yuma Chapter meets at the Arizona Game and Fish Department (AZGFD) Region IV Office, 9140 E. 28 Street in Yuma. It is conveniently located between the foothills and the city proper, making meetings more accessible to our far-flung members. We meet at 7:00 p.m. on the 3rd Thursday of each month from October to April. Find out about field trips by attending the meetings.

True to our “Yuman nature,” the Yuma Chapter regularly participates with local organizations whenever the opportunity arises. Many of our members are Master Gardeners and/or members of garden clubs or Yuma Audubon. Through these partnerships we promote cultivating and planting native plants for wildlife habitat and have educated the public about the many values native plants bring to the landscape.

Join Our Chapter E-list: If you would like to receive reminders and announcements about field trips and meetings via email, send a note to [email protected] to be added to the list.

Want to get involved? We've got just the thing!

During the winter season there are opportunities for members to table annual events such as the home and garden show, the Moody Garden art walk, and the Yuma Birding, Nature and History Festival.

During 2019-2020, members of the Yuma chapter joined the City of Yuma Tree and Shade Masterplan Task Force. The Society is contributing to the task force by providing information to encourage planting native trees.

WHERE TO ENJOY NATIVE PLANTS

Located on the west side of the Yuma County Fairgrounds on the north side of 32nd Street across from the airport.  Entrance gate is located just west of the Fairground south entry.

A community treasure of Sonoran Desert experience, environmental education, family events and volunteer opportunities. Open to the public from the first of November through the first of May every Saturday from 9-5 and Sunday noon to 5. Call 928-317-1935 to arrange group entry at other times. An assortment of mature cacti and a desert oasis are unique features of the garden.

The 110‐acre West Wetlands Park managed by City of Yuma Parks and Recreation is a jewel and beloved by the citizens of Yuma. The 30 acres of the “lower bench” are restored with a gallery of mature native riparian trees, and an additional 30 acres of the “upper bench” are developed with a lake, picnic ramadas, parking, lighting, and landscaping. A Butterfly and Hummingbird Garden features a mixture of native trees, shrubs and cacti.

The Yuma East Wetlands is considered a model for wetlands restoration in the desert Southwest and is led by a partnership between the Yuma Crossing National Heritage Area, Quechan Indian Tribe, City of Yuma, and Arizona Game and Fish Department.

Restoration activities were initiated in 2004 and nearly 400 acres have been transformed from a trash dump filled with hobo camps into a mosaic of marsh, mesquite, cottonwood, and willows which provide habitat for an array of wildlife species.

A few of the most notable species discovered since the East Wetlands was created include the endangered Ridgway’s Rail (Yuma Clapper Rail) and the presence and successful breeding of the endangered Yellow-Billed Cuckoo.

Yuma will forgo regular monthly, in-person meetings for the foreseeable future.
Instead, we will focus on outdoor activities—field trips and work projects—and
go virtual for meetings and similar indoor activities. Currently, we anticipate the
following:

September: Everyone keep an eye out for September bloom locations
following the summer monsoons, and we will schedule a hot, muggy but
beautiful field trip to check it out. Please post locations to our Facebook page
(AZ Native Plant Society Yuma Chapter). For example, at this moment, it
seems that the usually shy and somewhat cryptic mammillaria (fishhook cacti)
are ablaze and popping up like Easter eggs out in the Yuma foothills. Now, who
wouldn’t want to see that, no matter the heat? Also on our Facebook page, we
request that everyone post throughout the month of September about recent
plant travels and adventures. This Facebook event will take the place of our
usual October in-person “Show and Tell” program.

First off, if any of you are seeing wildflowers popping up, please post on our Facebook page ((20+) AZ Native Plant Society Yuma Chapter | Facebook). There are some annuals here and there. At least the palo verdes are spectacular and worth the venture outdoors.

For those of you that are tech savvy there is a couple virtual opportunities that may be of interest:

On Tuesday April 27 at 10 am AZ time there is a really great virtual national tour of school gardens headlined by actress America Ferrera. Learn more and sign up at Home – Growing School Gardens. One of the schools highlighted is in Arizona.

Another virtual program offered is a webinar on “Native Edible & Medicinal Shrubs for Wildlife and People” sponsored by Audubon Southwest featuring Dara Saville, an herbalist, geographer, writer, mother, and native plant advocate out of Albuquerque, New Mexico. The webinar will be held Thursday April 29th at 5 pm AZ time. There is a small donation requested. Find out more at Webinar Registration | Audubon New Mexico

Lastly, are you ready and willing to get out in the desert and kill? Our Chapter has again been asked by Marine Corps Air Station (MCAS) Yuma and partners to join other volunteers in a buffelgrass removal effort the morning of May 2nd. We will convene at 7:30 am at the Foothills Library parking lot and caravan from there to the worksite. Be sure to register for an access permit and complete the range safety briefing at

You will need to bring water, snacks/lunch, sun protection, and gloves. MCAS will provide shovels. Please let Val know if you can join us by emailing her at [email protected]. That contact info will also work if you have any questions. I sure hope you can come. It would be downright wonderful to see you (hopefully vaccinated) fine people before the summer heat swoops in.

Members of the Yuma Chapter are devoting meeting time to the study of plant families represented in the Sonoran Desert flora of our area. Asteraceae, the first family we studied, was presented remotely in December via YouTube by chapter president Valerie Morrill. In February, Erv Barnes followed with a discussion on the puzzling Zygophyllaceae. Later that month a group trekked to the Imperial Sand Dunes in California to find examples of both plant families, spring wildflowers, and to inspect an unusual growth form of creosote bush, Larrea tridentata. We stopped at two places off I-8. The first stop south of Sidewinder Road exit and the second was at the historical Old Plank Road ACEC on BLM west of the Grays Well exit. 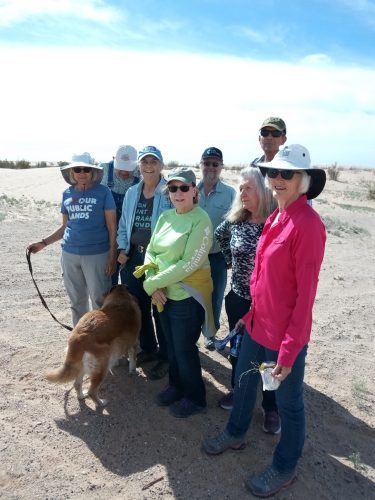 Following is a plant list and photographs recorded by member Linda Johnson. 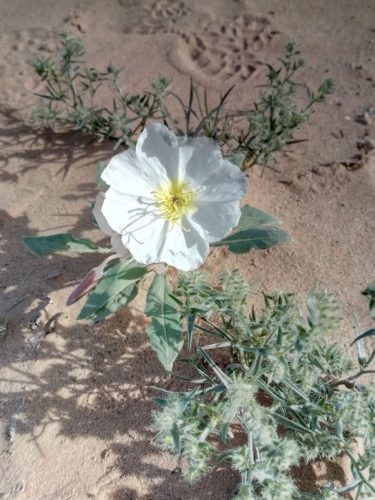 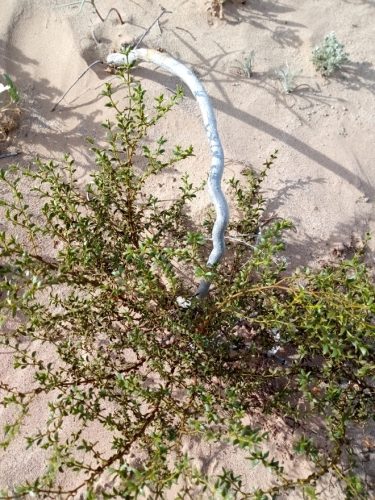 See what your chapter has been up to!