Stop Before you Chop

During early spring, the young Cirsium neomexicanum has already grown about 1 foot on its way to 6 feet in late summer. This prickly member of the Sunflower family (Asteraceae) is often considered a weed, unwanted, and dangerous. Before looking for a scythe, let’s take some time to evaluate this native desert plant. 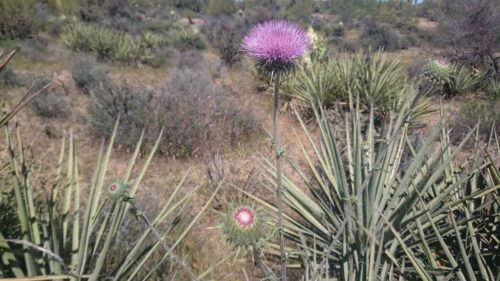 Common names for C. neomexicanum include New Mexico thistle, Desert thistle, Foss thistle, Lavender thistle, and Powderpuff thistle (Southwestern Desert Flora, 2020). It is scattered throughout most of Arizona as well as CA, CO, NM, NV, UT, and northwest Mexico, residing in multiple habitats, such as plains, hillsides, washes, roadsides, and even urban alleys.

From March to September, it produces pink, purple, lavender, or white fragrant and showy flowers up to 3 inches. The flower head is composed of many small flowers (florets) surrounded by modified or specialized leaves (brachts). The lower, outer brachts point downward, while the upper, inner bracts point upward and are somewhat twisted. 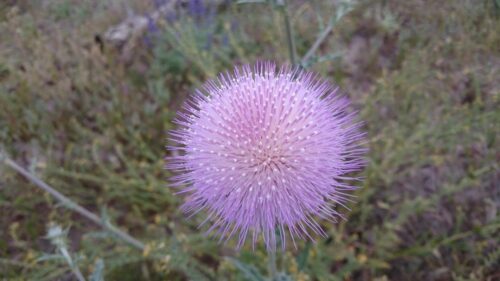 True thistles have spines along the leaf margins (Sivinski, 2016). New Mexico thistle’s spiny green or greenish-gray leaves have the lobes arranged on either side of a central axis like a feather (pinnately lobed) and can be up to 7 inches long.

Arizona and New Mexico each have 19 species in the genus Cirsium (Southwest Desert Flora, 2020). Native thistles support a wide variety of native pollinator and plant-eating insects, such as bees, butterflies, and moths by providing important habitat and food sources. Because native Cirsium spp. can be annual, biennial, or perennial, their nectar can help support pollinators year-round. In addition to drawing nectar and pollen from the flowers, many insects feed on the leaves, stems, and seeds.

Also, many songbirds are attracted to thistle seeds. A symbiotic relationship exists between American goldfinches and native thistles. Seeds and thistle down are food and nest building components critical to the bird’s survival. The timing of seed production and thistle down is related directly to the goldfinch breeding season. Because thistles are late bloomers and American goldfinches breed late in the summer, these birds have an abundance of seeds and thistle down to line their nests (Deane, n.d.). In return, the birds spread the thistle seed to additional areas.

Like its cousin the artichoke, New Mexico thistle is edible! Thistle stalks and taproots are sources of food for humans, but harvesting time is critical. Before the flowering stalks emerge, the taproots of young first-year plants can be dug up. At this early stage, the roots are tender and can be eaten raw or chopped up and added to soups or stews. Their texture has been described as crisp and crunchy with an almost nutty flavor. The stalks can also be consumed, but must be harvested when they are only about 1 to 2 feet high. (Beyond about 2 feet high the stalks are too fibrous and tough to eat.) Stalks can be peeled and eaten fresh or as a cooked vegetable. No significant medicinal uses for New Mexico thistle have been documented (Kane, 2020). 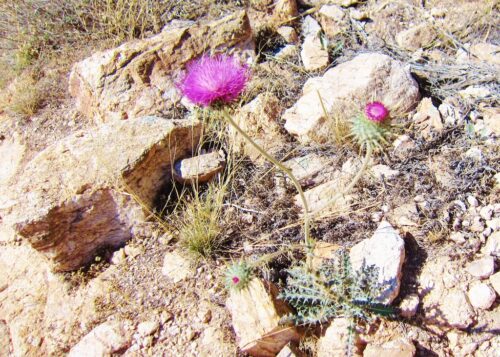 Most southwestern native thistles, including the New Mexico thistle, are non-aggressive and non-invasive (Karr, 2017). Native Cirsium spp. pose no fire risk and do not destructively displace native plants, thus remaining in equilibrium with other native flora. However, native thistles do reduce opportunity for invasive non-native thistles to populate a location.

Despite their benefits, native thistles are either knowingly or unknowingly killed simply because they are considered spiny “weeds.” In some areas, native thistle species are in danger of being complete eradicated. So, please, “stop before you chop!”